From the Fight against Discrimination to the Management of Diversity: The Decisive Role of Reporting and Steering Tools

To manage diversity effectively is to create value for the business. In order to do so, general management and HR departments must have at their disposal reporting and steering tools which give them a clear view of the results of their Diversity policy in all of the entities and at all levels of the business. 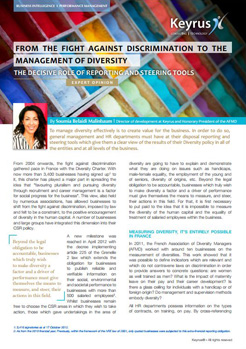 From 2004 onwards, the fight against discrimination gathered pace in France with the Diversity Charter. With now more than 3,400 businesses having signed up to it1 , this charter has played a major part in spreading the idea that "favouring pluralism and pursuing diversity through recruitment and career management is a factor for social progress for the business". This view, also held by numerous associations, has allowed businesses to shift from the fight against discrimination, imposed by law and felt to be a constraint, to the positive encouragement of diversity in the human capital. A number of businesses and large groups have integrated this dimension into their CSR policy.

A new milestone was reached in April 2012 with the decree implementing article 225 of the Grenelle 2 law which extends the obligation for businesses to publish reliable and verifiable information on their social, environmental and societal performance to businesses with more than 500 salaried employees2 . Whilst businesses remain free to choose the CSR areas in which they wish to take action, those which gave undertakings in the area of diversity are going to have to explain and demonstrate what they are doing on issues such as handicaps, male-female equality, the employment of the young and of seniors, diversity of origins, etc. Beyond the legal obligation to be accountable, businesses which truly wish to make diversity a factor and a driver of performance must give themselves the means to measure, and steer, their actions in this field. For that, it is first necessary to put paid to the idea that it is impossible to measure the diversity of the human capital and the equality of treatment of salaried employees within the business.

In 2011, the French Association of Diversity Managers (AFMD) worked with around ten businesses on the measurement of diversities. This work showed that it was possible to define indicators which are relevant and which do not contravene laws on discrimination in order to provide answers to concrete questions : are women as well trained as men ? What is the impact of maternity leave on their pay and their career development ? Is there a glass ceiling for individuals with a handicap or of foreign origin ? Do management and supervision methods embody diversity ?

All HR departments possess information on the types of contracts, on training, on pay. By cross-referencing this information with permitted criteria of age, sex, handicap, it is already possible to map out the reality of the diversities in a business. There remains the thorny question of ethnic origins. Thorny because it is known that they are major criteria for conscious or unconscious discrimination and that French law makes it forbidden to produce statistics in this area. One can, however, approach this dimension by using anonymous surveys to gather information on the nationality of origin of one of the parents of salaried employees. The CNIL and the Defender of rights3 have confirmed the validity of the criteria and indicators proposed by the AFMD. There is therefore no real obstacle to putting in place an objective system for the measurement of diversities : the indispensable data exist in most HR Information Systems (HRIS) and there is nothing to prevent the construction of meaningful indicators.

Measuring is essential for progress

For a number of businesses, the new social reporting obligations feel like an additional constraint. Others, on the contrary, see in them the opportunity to put in place a system which will help them to develop, and to make their actions in favour of diversities a permanent feature and a fully-fledged component of their performance. To achieve that, one first needs to know where one is starting from, at the very least as regards the criteria on which the regulator and the market observers require accountability. Once the starting point has been established, it then becomes possible to measure advances, compare performance, and re-balance efforts according to the priorities which the business sets itself.

For as long as it was not required of businesses that they demonstrate the quality and the reliability of their data, a certain approximation remained possible. Indeed, the Sustainable Development and CSR reports of large businesses were much criticised on this score. This was not deliberate. Quite simply, more often than not businesses – even those most committed to these issues – collected the data on a piecemeal basis at the time they prepared the report – an expenditure of time and energy which was all the more substantial given that it was renewed each year.

Automating so as to better focus on taking action

Having made this observation, Keyrus suggested to L’Oréal that it work on putting in place a system designed, on the one hand, to measure, coordinate and report on advances made by the Group with regard to its undertakings in relation to the fight against all forms of discrimination and, on the other hand, to enable each country to fine-tune its action plans according to priorities and to local regulatory specificities. This initiative translates into a dashboard comprising around thirty shared indicators covering the parity and the equality of male-female pay, handicaps, access to training, the diversification of recruitment, the integration of new arrivals and career development.

With this solution, Keyrus and l’Oréal have demonstrated that by using the Business Intelligence technologies which are often already in place in the business, it is possible to automate the production of indicators. This solution – which is entirely reproducible and therefore accessible to all businesses – simplifies regulatory reporting, but above all it allows the business to "benchmark" itself and to disseminate the information internally so as to strengthen the involvement of all concerned in the concrete and daily fight against discrimination.

Another vision of performance

Mesure, report, compare oneself with others, ajust and start again. It is the only way to progress and to move from the regulatory constraint to a real encouragement of diversities in the business. It is no longer a simple issue of an image to be projected in four colours in glossy brochures. It is, of course, an issue of social cohesion internally. And from now on it is an issue of overall performance of the business. To those in doubt, I can only recommend that they read the Diversity of human capital and economic performance study by Goodwill Management and IMS-Entreprendre pour la Cité. One of its main conclusions is that the diversity of human resources, once it is well managed, creates value and wealth for the business. Depending on the types of activity, it increases profitability by 5 to 15%4.

It is evident that separating economic performance from social performance will become less and less of an option for businesses. This has been understood by those employers who, by demonstrating their commitment, have obtained the Afnor Diversity label. They today number almost 400. In order to retain this label which sets them apart, and which is valid for 4 years and re-examined every two years, organisations must produce indisputable data. Putting a dedicated solution in place is – for these public and private organisations as for all businesses affected by the new CSR reporting obligations – a key step towards the truly integrated management of economic AND social performance.

1 : 3,416 signatories as at 17 October 2012.
2 : As from the 2013 financial year. Previously, within the framework of the NRE law of 2001, only quoted businesses were subjected to this extra-financial reporting obligation.
3 : Since 2011 the Defender of rights is responsible for the tasks hitherto performed by the High Authority for the Fight against Discrimination and for Equality (HALDE) in the fields of employment, housing, education and access to goods and services.
4 : Study published in November 2010. A presentation of the study and a summary of the results are available here.

Soumia Belaidi Malinbaum is today in charge of CSR and Diversity expertise for the Keyrus Group. She assists with CSR projects for major accounts, putting in place steering indicators and tools for integrated reporting. Possessing a legal training, she has spent the main part of her career in consulting and technologies as founder and manager of small-and-medium-sized businesses. She joined the Keyrus group in 2006 and is currently its head of development.

From the start of her professional life she has been committed to the promotion and the management of all diversities in the business by co-founding the AFMD (French Association of Diversity Managers) and acting as its president for 4 years. She is today its Honorary President.