Whilst the market in Europe is headed toward stabilization, Chinese e-Commerce continues to post spectacular growth rates. This vitality should accelerate in the coming years, thanks to an effective ecosystem and to "digital-oriented" consumers. Distributors and brands, notably Western ones, can find it to be a major growth driver, provided they know how to adapt to the local context and to the specific issues associated with this market. Here is an overview of "e-Commerce made in China", of the opportunities that it offers…and of the traps to avoid. 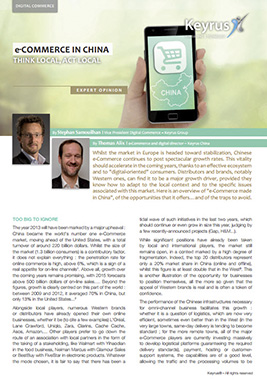 Too big to ignore

The year 2013 will have been marked by a major upheaval : China became the world's number one e-Commerce market, moving ahead of the United States, with a total turnover of around 220 billion dollars. Whilst the size of the market (1.3 billion consumers) is a contributory factor, it does not explain everything : the penetration rate for online commerce is high, above 6%, which is a sign of a real appetite for on-line channels . Above all, growth over the coming years remains promising, with 2015 forecasts above 500 billion dollars of online sales…. Beyond the figures, growth is clearly centred on this part of the world : between 2009 and 2012, it averaged 70% in China, but only 13% in the United States...

Alongside local players, numerous Western brands or distributors have already opened their own online businesses, whether it be (to cite a few examples) L'Oréal, Lane Crawford, Uniqlo, Zara, Clarins, Cache Cache, Asos, Amazon.... Other players prefer to go down the route of an association with local partners in the form of the taking of a stakeholding, like Walmart with Yihaodian in the food business, Neiman Marcus with Glamour Sales or BestBuy with FiveStar in electronic products. Whatever the mode chosen, it is fair to say that there has been a tidal wave of such initiatives in the last two years, which should continue or even grow in size this year, judging by a few recently-announced projects (Gap, H&M...).

While significant positions have already been taken by local and international players, the market still remains open, in a context marked by a high degree of fragmentation. Indeed, the top 20 distributors represent only a 20% market share in China (online and offline), whilst this figure is at least double that in the West . This is another illustration of the opportunity for businesses to position themselves, all the more so given that the appeal of Western brands is real and is often a token of confidence.

The performance of the Chinese infrastructures necessary for omni-channel business facilitates this growth : whether it is a question of logistics, which are now very efficient, sometimes even better than in the West (in the very large towns, same-day delivery is tending to become standard ; for the more remote towns, all of the major e-Commerce players are currently investing massively to develop logistical platforms guaranteeing the required delivery standards), payment, hosting or customer-support systems, the capabilities are of a good level, allowing the traffic and the processing volumes to be managed effectively. The only constraint : the requirement of heavy localization, notably in relation to hosting, so as to avoid suffering the limitations of the Chinese Great Firewall (the levels of performance of sites which are not hosted in China are significantly impaired).

Digital in China : a market which is truly... Chinese

Achieving success on the Chinese market is, however, not simple, and it requires steadfastness and above all a sense of adaptation. The market and digital habits are widely different and need to be taken into account if one is to avoid missing one's target. A few recent failures bear witness to this...

In the first instance, in digital matters, China is an autarchy : it has built itself up aside from the rest of the world, giving birth to an essentially Chinese digital industry. In China, Amazon is thus called Tmall, Google is denoted by Baidu, Facebook is pronounced Sina Weibo and Paypal is called Alipay ! The overall result speaks volumes, since China is the only country, with the United States, where the digital leaders are local : amongst the top 25 online audiences, 92% are operated by Chinese players…while this percentage is only 36% in France.

On top of this predominance of local players come particularities in the way the Chinese experience their relationship with digital :

Whilst the cultural relationship with digital is different, this is also very much the case with comsumer habits. The Chinese e-Consumer is Social, Global, Mobile :

In a rapidly-growing market, it is sometimes difficult to spot the new areas of challenges and territories into which the competition is going to shift. We have identified 4 of them, which seem to us to be the main challenges of the coming years :

Stephan Samouilhan is Vice President Digital Commerce at Keyrus. He is in charge of managing the entirety of the Group's e-Commerce business in France and internationally.

Thomas Alix is e-Commerce and digital director for Keyrus China. Based in Shanghai, he assists brands and distributors in the creation and implementation of their cross-channel sales platform.