Levallois-Perret, 24 September 2019 : the consolidated accounts for the first half of 2019 have been approved by the Board of Directors, which met on 24 September 2019. A limited review of the accounts has been conducted by the Auditors, whose reports are in the process of being issued.

The slowdown in growth affected solely the Large Account activities, which achieved organic growth of 2.2% in this first half of the year, as against 10.1% in the first half of 2018. As stated in the last financial press release, this slowdown had a major impact on the operating profitability of activities in Europe (mainly in France) and Brazil. However, Keyrus’s market and fundamentals remain sound and promising, in light of the medium-term trends linked to the digital transformation challenges facing major organizations worldwide.

Mid-Market activities increased by 7.3% at constant scope in the first half of 2019. In addition to the successful integration of the Arcadie group, Absys-Cyborg delivered strong organic growth during this first half of the year, thanks to reinforced delivery teams and the deployment of the new offerings incubated in 2018.

Current Operating Income from the Large Accounts segment, which stood at -€5.7m as against +€2.7m in the first half of 2018, showed a sharp decline.

Furthermore, the ROC was also impacted by significant investment in structure also undertaken in the second half of 2018 to support the expected growth. With the deterioration in the margin experienced in the first half of the year, this investment was not able to pay for itself.

Major actions have been initiated to improve the capacity utilization rate and adjust fixed expenses. These will make it possible to achieve much improved profitability in the second half of 2019.

Current Operating Income from the Mid-Market segment stood at €1.4m as against €2.4m in the first half of 2018.

Eric Cohen, President & CEO of the Keyrus Group, comments: "This first half of the year has seen a marked slowdown in the performance of our Large Account activities, and the lessons have already been drawn from this, going forward. In a market that, albeit slowing down, remains buoyant, the emphasis will, from now on, be placed on the strict management of our margins for all the geographical zones in which we operate, with a significant turnaround expected as early as the second half of 2019.  With 15% growth in orders in the first half of the year, our Mid-Market activities continue to look promising for the second half of the year.

Looking beyond this difficult first half of the year, Keyrus continues to gain market share and consolidate its position as a leader in "Digital Intelligence" to help companies transform themselves by drawing on their "data", improve their performance, and set themselves apart within an ever more complex digital ecosystem."

Keyrus will publish its revenues for the third quarter of 2019 on 7 November 2019 after the market close.

Application of the IFRS 16 standard

As of 30 June 2019, the company applied the IFRS 16 standard. However, the company has opted not to apply it to the 2018 comparables presented in this press release. The impact on the income statement and the balance sheet as at 30 June 2019 are : 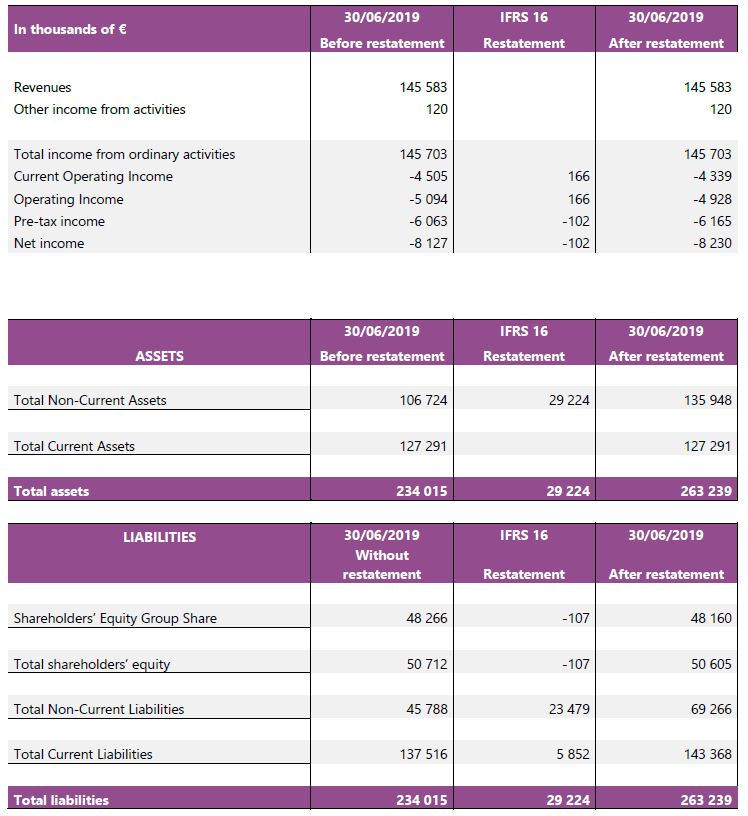