Levallois-Perret, 2 April 2019 : The Keyrus Board of Directors met on 2 April 2019 in the presence of the auditors and finalized the audited consolidated accounts for the 2018 financial year.

The Keyrus Group recorded consolidated revenues of €273.2m for the 2018 financial year, representing an increase of 6.6% as compared with the 2017 financial year (7.9% at constant scope and exchange rates). Based on reported figures, the revenues of the Large Account segment grew by 6.2% and those of the Mid-Market segment by 8.2%.

With organic* growth of 7.8%, and in spite of a slowdown observed in the fourth quarter in France and Brazil, Large Account activities delivered a performance that was significantly above market, notably with growth rates of over 20% on average for the Group’s operations in the two Americas (United States, Canada, Brazil, and Colombia) as well as in Asia.

Mid-Market activities increased by 8.2% in 2018 at constant scope, as against 6.1% for the 2017 financial year. More generally, 2018 revenues were driven by sales of licences and subscriptions, which increased by 27.3%, notwithstanding the adverse impact of the conversion of perpetual licence sales into subscription mode. Moreover, the bedrock of repeat contracts continues to expand, having grown by 7.3%, and it accounted for 38.0% of 2018 revenues.

The implementation of tax deduction at source in France (which had an impact of €3.6m on the payment of salaries for December 2018), as well as a reduction in the time taken to pay subcontractors, have had a major impact on cashflows generated by the business, which were €61k in 2018, as against €1,424k in 2017.

In December 2018, the Group put in place a new syndicated credit facility with its longstanding financial partners for a total amount of €65.0m over 6 years. This credit arrangement replaces the previous one that was entered into in February 2016, and it is made up as follows:

-          €15.0m of confirmed credit lines in place of €5.2m of overdrafts and bilateral treasury bills to finance working capital requirements.

This new financing gives the Group the means to pursue its growth and innovation strategy.

The  2019 financial year should see a confirmation of the growth and innovation momentum for all the Group’s activities in France and internationally, through the deployment of ‘integrated’ offerings combining all areas of Data, Digital, and Transformation know-how.

Mid-Market activities, which delivered an excellent operational performance in 2018, should continue to deliver a similar performance and secure a return on the investments initiated last year around the new offerings : Cloud Managed Services, Finance Management and Cash Management Consulting with a new partner, Kyriba.

Eric Cohen, President & CEO, comments : "In 2019, with the sector remaining promising and digital transformation projects mushrooming, Keyrus will press on with its internal transformation by pursuing projects launched in 2018 in relation to governance, organization, and operational efficiency, notably in its two major countries: France and Brazil. The first quarter of 2019 should continue the trend of the fourth quarter of 2018, with a slowdown in growth linked mainly to difficult recruitment conditions. However, Keyrus’s innovation strategy and its positioning as a specialist should allow us to once again achieve profitable organic growth in 2019."

Keyrus will publish its first quarter 2019 revenues after market close on 9 May 2019. 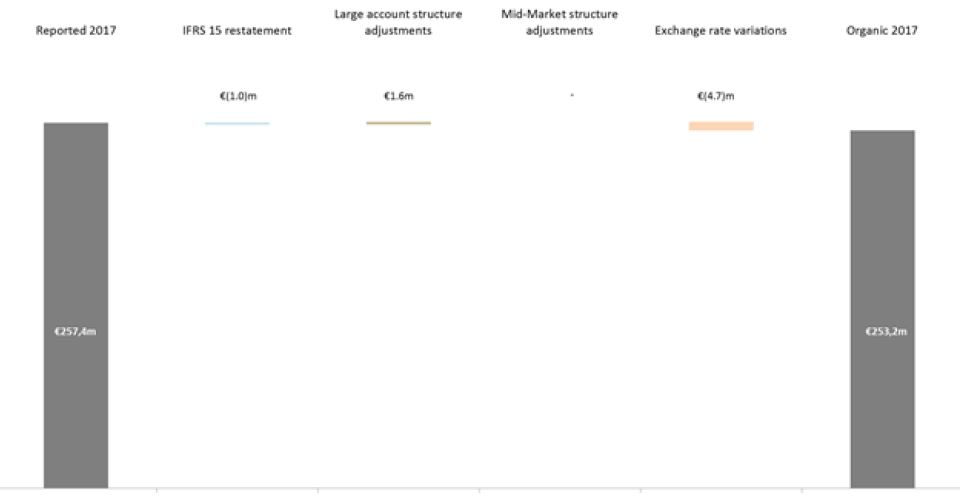 IFRS 9 determines the principles and methodology to be applied in measuring and recognizing anticipated credit losses on financial assets, loan commitments, and financial guarantees.

Unless otherwise specified, 2017 income indicated in this press release has been restated so as to be in accordance with the application of the IFRS 9 standard and comparable with 2018 income in terms of accounting methods.

Cash and cash equivalents, recorded as assets in the balance sheet, after deduction of bank overdrafts